Owen was an eight year old boy who had initially been referred to a Therapeutic Storywriting Group that I was running in a school where I was modelling the intervention for a group of staff. The school was in the local authority’s most socially deprived area and there were concerns about both the schools poor attainment levels and the high number of exclusions.

Although the least able in the group, with his writing and reading still at level 1, Owen worked well in the group sessions when he was present. However, he was often absent due to the fact that he was excluded on four separate occasions during the term the Therapeutic Storywriting group was running with one of his exclusions being for 5 days. The reason for his exclusion was challenging behaviours that included running out of class, violent outbursts in class and in particular physically attacking other children. According to his classteacher, while he often seemed to ‘kick off’ for no apparent reason, his anger could also be easily triggered by some of the other children making a disparaging comment about his mother. He had been referred for diagnosis of ADHD but this had not been confirmed.

The headteacher described Owen as one of the most troubled and troubling pupils in the school. He also said that Owen’s mother usually came ‘gunning’ for him on a daily basis; he then added ‘and often not once but twice a day.’  It seemed that Owen’s mother was as much of a concern to the school as Owen himself! In fact when I spoke to a number of staff about how we might best support Owen, I was told by more than one that his problems came from his home situation. When I suggested that we might invite his mother to participate in a Story Links programme I was told, again by more than one member of staff, that she was unreliable and that she was unlikely to attend sessions. Despite Owen’s challenging behaviour, all of the staff who had contact with him appeared to also have a ‘soft spot’ for him – they particularly mentioned his honesty as a redemptive characteristic i.e. he always owned up to what he had done. There was a feeling that he somehow couldn’t help himself when he ‘kicked off’ and blame was generally placed on the mother’s parenting rather than on Owen.

I spoke to the SENCO and found out a bit more about Owen. She told me that he, along with his younger brother, had been taken into care for 2 years when he was 3 years old because of child protection concerns. Certainly, Owen’s behaviour seemed consistent with a child with confused attachment: hyperactivity, rescuing the parent, ‘kicking off’ for no apparent reason, (Geddes, 2007; Barrett & Trevitt, 1991). This hypothesis was confirmed by a short piece of writing he had produced in the Therapeutic Storywriting Group.

I had given the group the opening “Dino the dragon lay outside his cave.  Never before had he felt so lonely…” . I wrote this opening in Owen’s book to help him get started.

After 10 minutes of concentrated effort he managed to write ‘because he didn’t have anyone who wanted to play with him. So he burnt his Mum’s plants.’ (spelling corrected) 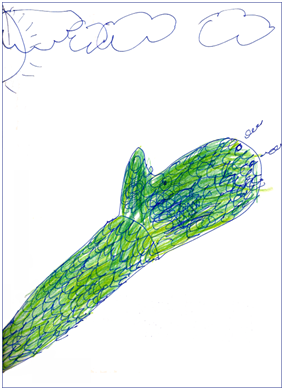 I then used active listening skills and reflected back to Owen, “I imagine Dino was upset because he didn’t have any friends, but I wonder why he burnt his Mum’s plants?”

He then replied, “He wanted to tell his Mum how miserable he felt and had called her 17 times but she didn’t come. So Dino just walked off into the dark shadows.”

I typed out his story including his reply in italic and pasted it into his book.

Owen’s mother was invited in to meet me by the SENCO at the school. When she arrived she accepted my offer of a cup of coffee and I then explained the outline of the Story Links programme, focussing first on the school’s concern over Owen’s poor reading skills and pointing out that as the most important person in his life it might make a difference to his achievement if we could work together to support his reading for a period of time. I also said that we would use the  stories to address emotional  issues that Owen might be having difficulty with in order to help him feel happier in school.

Mother listened but seemed rather noncommittal until I showed her Owen’s book from  the group. I took what felt like a calculated emotional risk and read her Owen’s story about Dino’s mum not coming despite his calling her 17 times. (link to story) Owen’s mother then seemed to become engaged for the first time in our meeting. She looked me directly in the eyes and asked, “Do you think children just write stories or are they writing about themselves?” Using my best active listening skills I replied, “What do you think?” She then said, “I think this story is about him. I think it’s because I don’t give him any time. I give all my attention to his younger brother who’s still my baby even though he’s only a year younger than Owen.”  She then said that she thought she should come into the sessions in order to give some time to her older son. She mentioned how she found his behaviour hard to manage at times though also mentioned how he seemed to think he was ‘the man of the house’ and would ‘have a go ‘ at his younger brother if he was ‘horrible’ to her.

Owen’s mother then spoke about how the children had been taken into care but that they had been returned to her three years ago and that  she was now trying to get her life ‘back on track’ . She also asked if her trusted social worker would be able to come along to sessions with her.   As the Story Links sessions have an open systemic format I said this would be no problem. I later contacted the social worker who was pleased to have a chance to be involved with a school-based project. Mother was also concerned about her own poor literacy skills and described herself as ‘dyslexic’. I reassured her that this wouldn’t be a problem. With the support of the social worker, Owen’s mother managed to attend 8 out of the 10 sessions, with one missed because of a hospital appointment and one missed without any explanation.